Watching the Watchers? Not in Maryland

Gizmodo (of all places) does a good job of summarizing a creeping trend by law enforcement to use wiretapping laws go after citizens with the temerity to capture wrongdoing by law enforcement. Â  Gizmodo explains:

The legal justification for arresting the “shooter” rests on existing wiretapping or eavesdropping laws, with statutes against obstructing law enforcement sometimes cited. Illinois, Massachusetts, and Maryland are among the 12 states in which all parties must consent for a recording to be legal unless, as with TV news crews, it is obvious to all that recording is underway. Since the police do not consent, the camera-wielder can be arrested. Most all-party-consent states also include an exception for recording in public places where “no expectation of privacy exists” (Illinois does not) but in practice this exception is not being recognized.

A recent arrest in Maryland is both typical and disturbing.

On March 5, 24-year-old Anthony John Graber III’s motorcycle was pulled over for speeding. He is currently facing criminal charges for a video he recorded on his helmet-mounted camera during the traffic stop.

The case is disturbing because:

1) Graber was not arrested immediately. Ten days after the encounter, he posted some of he material to YouTube, and it embarrassed Trooper J. D. Uhler. The trooper, who was in plainclothes and an unmarked car, jumped out waving a gun and screaming. Only later did Uhler identify himself as a police officer. When the YouTube video was discovered the police got a warrant against Graber, searched his parents’ house (where he presumably lives), seized equipment, and charged him with a violation of wiretapping law.

2) Baltimore criminal defense attorney Steven D. Silverman said he had never heard of the Maryland wiretap law being used in this manner. In other words, Maryland has joined the expanding trend of criminalizing the act of recording police abuse. Silverman surmises, “It’s more [about] â€˜contempt of cop’ than the violation of the wiretapping law.”

3) Police spokesman Gregory M. Shipley is defending the pursuit of charges against Graber, denying that it is “some capricious retribution” and citing as justification the particularly egregious nature of Graber’s traffic offenses. Oddly, however, the offenses were not so egregious as to cause his arrest before the video appeared. 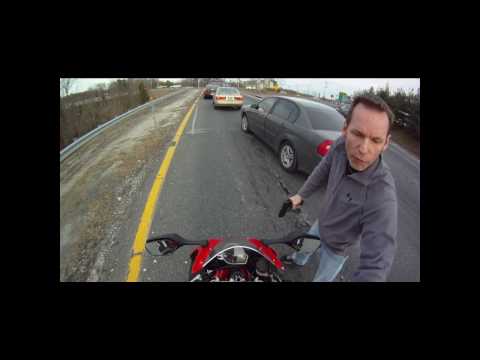 Now, there’s a longer video which shows exactly why this rider deserved to get a speeding (and perhaps Riding Like a Dumbass) ticket. Â But wiretapping? Â Seriously? Â What an absolutely ridiculous abuse of the law. Â  Some in Maryland want to change the law, but so long as it’s accepted as a defensive weapon for the police, I don’t think we’ll be seeing that happen anytime soon. Â Interest in more about this? Â Go check out Photography Is Not a Crime.

Getting Hit by a Car: Some Lessons