It’s almost time for the Virginia legislature to start a new session. Â And once again, they’ll have an opportunity to help make Virginia’s roads safer by bringing its laws into line with the rest of the country. Â For reasons I can’t fathom, this has somehow turned into a partisan question. Â Fairfax’s Delegate Barbara Comstock has repeatedly stood in the way of laws that would lead to safer roads. Â As WABA’s Greg Billing explains it:

I hope you’ll let her know what you think of this.

As you’ve certainly heard by now, Bigot Extraordinare Rep. Bob Marshall and the clown show that is the Virginia GOP continued Virginia’s grand tradition of hatefulness when:

[T]he judicial nomination of Mr. Thorne-Begland, a former Navy fighter pilot who is gay, was sabotaged by an ugly campaign of homophobic bigotry led by Virginia Republicans. In a vote at 1 a.m. Tuesday, the GOP-dominated House of Delegates, with an avowed homophobe leading the charge, killed his candidacy, thereby ensuring that Virginia state courts remain free of openly gay judges.

The usual attempts toÂ obfuscate and cast doubt upon the reasons behind the vote have quickly made their appearances, of course. Â While Virginia’s got a well established tradition of narrow-mindedness and willingness to use the power of the state to discriminate, one thing it simply cannot stand is actually labeling these actions for what they are.Â Â Waldo Jaquith does a great job of sorting out the vote here.

Just finished a weekend at Transparency Camp 2012. Â As with lots of these types of conferences (PrivacyCamp and Freedom2Connect come to mind), I approach these as something of an outsider – I’m tech-curious, but by no means experienced. Â In the end, I’m just a lawyer, and my expertise in methods often feels a world away from from the folks focused on APIs, datasets, and the latest visualisation tools. Â They say API, and I’m allÂ APA!Â  One of the big to-dos I came away with was to come to next year’s event prepared for a “I am not your lawyer, BUT . . . ” session.

Still, I felt it an incredibly worthwhile expenditure of my time. Â I feel like we’re hitting the hook on the hockey stick graph, with progress shooting up as we get more people that “get it” in government* and as we simply get more quality work out of those working with the datasets. Â  CivicCommons.org? Â Sweet. Â OpenPlans? Â Yes, please. Â MapBox? Â Wow.

One of the biggest things? Â I was blown away by the amount of personal time and effort put into making tools for better government. Â All sectors benefit, to some extent, from the personal contributions of people involved with them. Â But there were people who had flown from the other side of the planet, on their own dime, to participate in a conference so they could invest yet *more* personal time in something that would ultimately benefit more people than would ever be able to thank them. Â I’m not sure that’s sustainable, but damn is it encouraging.

Finally, I want to give some shouts to some local gov’t folks that showed up to this. Â Montgomery County’s Hans Reimer led a great session on day one. Â Alexandria’s Craig Fifer not only killed it with chicken, but did a great job in presenting on the myths and truths of pushing for transparency in local government. Â There were also some DC .gov folks there, but I sadly didn’t get too much of a chance to interact with them. Â And really, I regret not roping any Arlington County folks into this, but you can be sure I won’t make that same mistake twice.

*I don’t have enough experience that I could honestly defend challenges to this premise that went more than a few rounds, but . . . man, the gov’t folks I see attending this conference now? Â Exponentially more with it than the folks I encountered in my municipal broadband days (’03-05).

Credit Card Currency Conversion Fee Settlement Windfall! (Or: I Should Have Picked Option A)

Back in December of 2007, I posted about a proposed settlement for the Credit Card Foreign Transaction Fee class action suit. Â Members of the class had three options for recovery:

Despite having have spent a substantial amount via credit cards in foreign currency over the years, I ended up just going for option 2. Â It just involved flipping through my passport and copying over the dates onto the claim form. Â As I noted in the comments to the original post, it had to be worth something, right? Â Well, almost 4 years later, I got my check.

I should have gone with Option A, eh?

(Also, if you submitted a claim? Â Watch your mail closely. Â It doesn’t look like a check at all. Â I nearly threw this one out.)

Virginia Justice for Cyclist Left in Coma By Reckless Driver

You might have heard of the case of Michael Sprick, a German cyclo-tourist who has been in a coma since October. Â He was enjoying the roads near Roanoke, Virginia as part of a NY-Miami tour, when he was hit by a truck driven by Norman Marchant. Â Mr. Marchant was convicted of driving with a suspended license and reckless driving yesterday. Â It appears he was fined $600. Â The 90-day jail sentence was suspended. Â I want to talk a little more about what happened, and how authorities responded, but I think it’s best to start off with a report from Carol Colby, who was present for the trial.

END_OF_DOCUMENT_TOKEN_TO_BE_REPLACED

As part of an oversight hearing in which the TSA was (quite properly) criticized for a wide array of wrong steps and misguided policies, Sen. Leahy (D-VT) revealed himself as someone who appreciates the right to take photos:

Leahy, an amateur photographer, also faulted TSA workers for telling travelers they can’t photograph checkpointsâ€”including when they see a well-known senator being put through the process.

“I do provide amusement for people taking cell phone pictures of me until the TSA agent tells them thereâ€™s a law against taking photographs [of checkpoints]. Of course,Â there is no such law,” groused Leahy, who as Judiciary Committee chairman ought to know. “Maybe youâ€™ll miss your plane because they’re annoyed that you want to protect your rights.”

How Much to Kill a Cyclist? $30 in Goochland County.

Don’t even know what to say about this:

Fawell, 38, struck the passenger side of a pickup truck driven byÂ Gerald Lee Anderson, 70, of the 600 block of Nelwood Road inÂ Goochland County, and died from massiveÂ head traumaÂ atÂ VCU Medical CenterÂ in Richmond on Aug. 29, four days after the crash.

General District Judge Peter L. Trible said adverse weather, including driving rain, lightning and near darkness, did not absolve Anderson of his duty to yield to Fawell as Anderson turned left into Rockville Center on Pouncey Tract Road, apparently crossing in front of Fawell.

The judge fined Anderson $30. No prosecutor was present for the case.

More details about the incident and victim at the link. Â Credit to Bill McKelway for writing it up fairly. 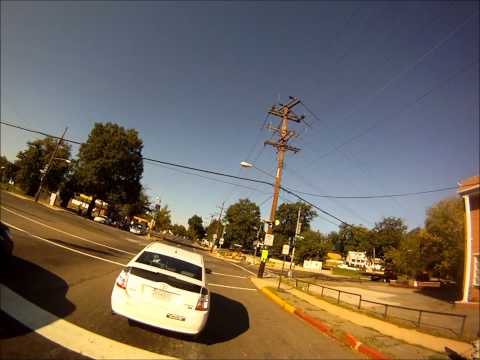 Cycling and the Rule of Law

In the middle of contemplating (and deciding against) responding to this ridiculous piece at the Ballston Patch, and getting a rather positive impression of recent ACPD enforcement efforts along the Custis Trail, I came across one of the smartest posts on cycling and the law that I’ve ever seen:

If you tried to survive [on the road] by counting on people to follow the formal rules, youâ€™d be toast. Some of this is just ignorance of the law, but some of itâ€“like speedingâ€“is the result of informal practices that dominate the formal rules. Some of those informal practices might be more efficient than their formal counterparts, but surely some are not. So, even in places where â€œrule of lawâ€ supposedly prevails, many of our daily practices are still built around shared expectations based on unwritten and sometimes inefficient rules, and these unwritten rules can be very hard to dislodge when they are widely followed.

Check the rest of it out. Â Lots to think about.

I did a radio interview with WAMU’s Elliot Francis yesterday, and it resulted in this two-minute piece this morning. Â It was a nice change of tone from the usual Cars v. Bikers! approach taken by the general media, and I’m glad I did it. Â Unfortunately, I think the piece leaves readers with an incomplete understanding of an important point in the law – that cyclists need not be riding at the speed of cars in order to take the full lane. Â  As I wrote to Mr. Francis after it aired:

“I do want to point out one small, but important, piece of missing info. You wrote that “In fact, laws in D.C., Maryland and Virginia allow bicyclists full use of the travel lane when they can match the normal speed of traffic.” This is correct, but it’s not the only time that cyclists may use the full lane. The other circumstances are what seem (to me) to be a mystery to many drivers, and that leads to impatience when they don’t understand what the cyclists is doing is perfectly legal and safe. Cyclists may also use the full lane when it’s too narrow to share, when there are road conditions that make it impractical to ride to the right (think debris, grating, car doors, etc.), and when they are preparing to make a left turn. The Code of Virginia Â§ 46.2-905 provides for these exceptions (http://leg1.state.va.us/000/cod/46.2-905.HTM). Â There are variations in the language in MD and DC’s laws, but the fundamentals remain the same.”

That said, I’m still encouraged by this kind of reporting, and I look forward to more.

While I’ve got you reading about cycling and road safety, please go take a look at this fantastic letter from Maryland’s Director of Bicycle and Pedestrian Access, Michael Jackson. Jackson’s responding to a citizen letter complaining about the “arrogance” of cyclists who use the full width of a lane or decline to ride on parallel trails instead of the road. Jackson methodically goes through the reasons a cyclist would (and should) make those choices. As WABA board member Jim Titus puts it – that’s safe cycling, not arrogance.